About Us – “Shoulder To Shoulder”

Our club was incorporated in 1963 and on March 14, 1986 we obtained our “Final Seal”, which is effectuated by the Army, Navy and Air Force Veterans in Canada, Dominion Command. That “Final Seal” document is framed and hanging on the wall in our Club Room.  It was retyped below for ease of reading. 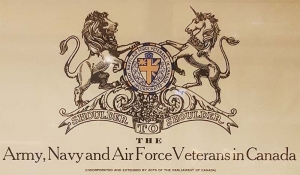 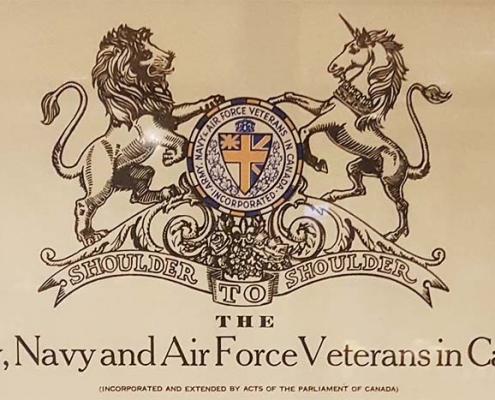 We, the Army, Navy and Air Force Veterans in Canada, under and by virtue of the powers conferred upon us by Act of Incorporation being Chapter 70 of 78 George V. of the Parliament of the Dominion of Canada by Amended Statutes authorizing us to establish Branches of this Association at any place in the Dominion of Canada,

REPOSING GREAT CONFIDENCE in the loyalty, integrity, prudence and good citizenship of the hereinafter described Veterans duly qualified to become Active Members of our Association, who have by their petition, supported by the Declaration of intention to become members of twenty five other qualified Veterans as required by the Constitution, asked that a Branch of the Association be established in their midst.

HAVE BY RESOLUTION of our Governing Executive passed the First day of June 1937.

Petitioners in that behalf and such other persons as shall become members thereof a Branch of the Association to be known as
— A Unit of the Army, Navy and Air Force Veterans in Canada —
under the Name, Number and with the Powers and Jurisdiction within the purview of the said Act of Incorporation as amended hereinafter set forth.

Toronto Township in the County of Peel, Ontario

THE POWERS CONFERRED ON SAID UNIT shall be and include all such Powers and Authorities as by the Constitution of the said Association is conferred upon Units and shall with these presents in accordance with any provisions of the Constitution in that behalf in force, be subject to such amendments, variations, qualifications, restrictions and revocations at any time or from time to time as shall be considered by the Association or its Governing Executive in the interests of the Association necessary or advisable.

THE HEADQUARTERS OF THE SAID UNIT shall be situated at Lakeview in the Province of Ontario and shall not be removed therefrom without the consent of the Governing Executive of the Association.

IN TESTIMONY WHEREOF We, The Army, Navy and Air Force Veterans in Canada, have this Fourteenth day of March 1986 caused these presents to be sealed with the Great Seal of our Association witnessed by hands of our proper Officers on that behalf.

The ANAF objectives are to provide assistance and support to veterans and their families, to members of the Canadian Armed Forces, and to our community. We also visit hospitals, financially support local and national charities, youth programs and community services and activities.

You do not have to be former military to join our club, although in the past our membership has been comprised of veterans of past and present wars, Regular and Reserve Forces, Military Cadets, and the Police. We also have veterans from the Allied Nations Forces and members of our community who actively show their interest and support our objectives. Please visit our Memberships page for details and application forms for joining out unit.

Sports are an important function of our club. We have two 8ft Brunswick pool tables, and 16 dart boards. We have two winter dart leagues and one summer league.  Spares are always welcomed. We offer Cribbage in the winter and Horseshoes in the summer months. New players always welcome. Snooker and other pool games are favourites of the unit and a game can be had pretty much any time. There is a snooker league on Saturday Afternoons in the winter. You do not have to be a member to play in most leagues.

We offer live entertainment most Friday nights and often host a LIVE Music Jam which features various accomplished musicians and unexpected musicians from the audience will often join in.

Upstairs Hall rental with optional catering is available for your private or public functions. Please visit our Hall Rentals page for more details.

The Club Room (Downstairs) is open to non-members daily except for when we hold our monthly meetings. Feel free to drop in, enjoy a cold drink and experience our wonderful club.

Enjoy some of your favourite sporting events on our 106 inch HD Big Screen Projection TV!  There are two regular TV’s in our Club Room as well.

Our Licensed Patio will accommodate 45 so come visit and enjoy the sunny days outside!

Find or Email Us

This site is SSL secured by: